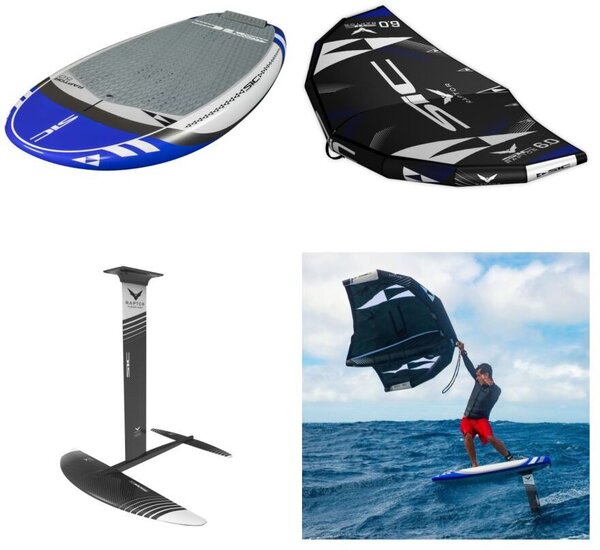 The Raptor wing foilboard is a performance dream board. This board lifts off with ease due to its relatively low rocker. The rail chines reduce the chance of catching on touch-down while banking upwind, carving a jibe, or turning hard in the surf. This board is narrower than a SUP foil board because you have the power of the wing to generate stability, which comes from the forward momentum as you accelerate from a sitting or kneeling position. The board still has enough volume to start standing on your feet for the more advanced wing foiler. Add foot straps for the board for more power to the foil or if you intend to catch air.

The Flite base configuration is great for those getting started as well as advanced foiler’s. It offers superior lift, maneuverability, and control at low-speed. It tacks and jibes with ease. The thicker foil and longer chord lengths generate exceptional lift at low speeds and perform well in the bumps, small to mid-sized surf and SUP and wing foiling.

The all-new SIC Raptor wing has been designed and rigorously tested by the team on Maui and Europe. Working in collaboration with sister company CORE Kiteboarding, a leader in kite design and technology, SIC is proud to introduce this series of performance wings.

Our industry-leading, CORETEX® TRIPLE RIPSTOP canopy materials was developed by CORE Kiteboarding and is only available on the SIC Raptor wings. This high- performance fabric is protected and strengthened with a unique coating process. CORETEX® sets the standard in breaking strength, tear resistance, UV protection, elongation, and overall durability. Feel the tight, crisp signature only a CORETEX® built wing delivers.

The wing's high aspect ratio provides tremendous power, and due to the shorter wingspan, it reduces the chance of your wing tip dragging in the water when powering up, tacking, jibing, and board touch-downs.

The Raptor wing uses an in-flow panel connecting the canopy with the control strut, ensuring that the wing maintains the most efficient aerodynamic profile during acceleration and cruising speed.

The RUSH-AIR valve system enables you to quickly inflate the wing to the requested inflation pressure with little effort and allows you to deflate the wing in case of pressure adjustment or when you want to pack up the wing.

THE RAPTOR WING COMES WITH: